Posted by almondjoycie on December 3, 2009 in Gripes

Yesterday afternoon, as my husband was heading out for his swim before going to work, we got a call from relatives from out of town who wanted to visit. Nothing like unexpected company! As my husband walked out the door, he said “Why don’t you whip something up for tonight?” which meant something sweet, baked and homemade, set to dazzle their taste buds.

My mind was still scattered from being around my rowdy kids all day so I turned to the help of my friends via facebook status update. The tricky part to this dilemma was that I am due to making some serious grocery shopping to restock my shelves. The only “special” if you can call it that ingredient I had was brown sugar. Their suggestions were slow in coming but I got this: peanut brittle (no peanuts), baklava (only if hubby would spring for it, and he prefers to show off my culinary talents), spice cake and jello (impressing them with my jiggle isn’t what I had in mind, I do that without trying!)

So I whipped out my favorite all-around cake recipe that I got from recipezaar. It’s called sand cake, and there must be a story behind that, although I don’t yet know why. This recipe has unlimited variations based on what you have on hand. As for the spices, I have a rack full of them, so I made a combination of cardamom, cloves, allspice, and ginger. I also threw in some apricot preserves for added pizazz. I am a bowl-licker and it was tasting good already.

When selecting the pan, I turned to my teenage daughter and gave her a choice of springform-tube pan (sensible choice) and the Bundt pan. She chose the Bundt pan. Needless to say, after finishing this fine cake, waiting ten minutes for it to cool a bit, running a knife along the edges, the best I could, I flipped it while uttering a little prayer. It fell. I lifted the pan up and Aaaarrgh! No this can’t be happening! The entire outside of the cake is still in the pan!

I remembered a little dish called a trifle. I didn’t make it, actually we scrapped our plans for sweets in the end and my husband brought something. But it made me wonder about the origin of such a dish. This is by no means factual, but I will google it later to get to the bottom of this dish (no pun intended). I am imagining that another frazzled but trying to be amazing wife made a cake in a Bundt pan for her husband and his relatives. The Bundt pan, by the way, I have renamed the Pan from Hell. The pan let her down as well. She had no alternative but to salvage this dessert, so she whipped up a little sauce, whipped up a little cream and adorned it with nuts and chocolate shavings. 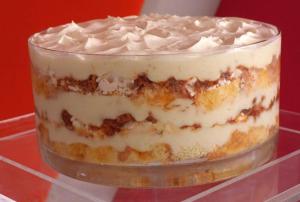 When serving her guests, she had no name for it other than “a little something I whipped up”. Her guests were leary and held out their plates saying “just a trifle” for the amount of their serving, hence the name trifle. Luckily, the wife amazed them in the end, and the dessert was made on purpose, not by mistake by thousands, millions, maybe billions to follow her lead. And she lived happily ever after, or at least until her husband sprung surprise guests upon her again.

Note: Try googling Bundt pan and you will not find a disastrous picture in the bunch. I sense a conspiracy.

4 comments on “just a trifle”

I Write Like by Mémoires, Mac journal software. Analyze your writing!